An explanation of entries on the election result forms in Turkey

There are a number of election fraud allegations for the recent local elections in Turkey, which were held on March 30th. So far, I have been able to refute most of these allegations, which stem from a lack of familiarity with the official election result reports ("tutanak" in Turkish). I worked as a member of a ballot box committee on the election day, and I must say that the result reports were somewhat confusing. Hence, I have decided to explain in detail what each entry on the reports mean. Below you will see a closeup view of the entries at the top of a filled election result report.

The numbers from (1) to (15) are found in the original document and they correspond to the numbers on the results pages for individual ballot boxes at the CHP STS site. There are a number of unnumbered entries above entry numbered as (1), which I have assigned numbers to describe them easily.

Now you will notice that the rows numbered (1) through (3) are within a box, and row number (3) is shaded in gray, for emphasis.

Finally, there is another box on the right, titled "Invalid Votes," including rows (10) through (15). Row (15) is highlighted again in gray.

Now, for each of the three boxes, the last row must be the sum of the previous rows. Hence, the following must true for these three boxes:

Returning to the left side of the report, here is the descriptions for the unnumbered rows, which I have numbered myself for convenience. This unnumbered rows area starts with the qualification "Those which have been received from the county election committee". Below, you may find descriptions of these rows, alongside the numbers found in the report above.

Now, here we come to the confusion which results in erroneously labeling some ballot boxes as having more than %100 voter attendance. The language of these entry descriptions is vague enough that some ballot box committees included unused ballots in entry no. (14), within the "Invalid Votes" box. At this stage, please note that the report above does not make this mistake. The number of unused ballots is recorded only in row no. 19, and for the report above, it is 57.

I have just noticed that above row no. 16, there is another entry which comes with a number that has already been printed. It is "the number of voters that are recorded in the Ballot Box Register [for this ballot box]" For the report above, this number is 315.

Finally, at the bottom of the picture above, we see two notes, labeled "a" and "b". They are:

This is the most important equation that all ballot box committees try to keep in balance. This is why entries numbered (3), (9) and (15) are shaded in in gray for emphasis. I must also state that this equation only concerns cast votes. I will refer to this as the Golden Equation.

b. The total of all votes received by the political parties and independent candidates must be equal to the number of valid votes (9)

Now, we come to a final equation that takes into account, not just the cast ballots but all ballots, including the unused ones.

Let us now look at another report, a famous one that was RTed nearly 3000 times, namely Ankara Sincan 2061. I will show you how one simple misunderstanding has confused the election committee and wreaked havoc in all the numbers (but not the number of votes received by each party). 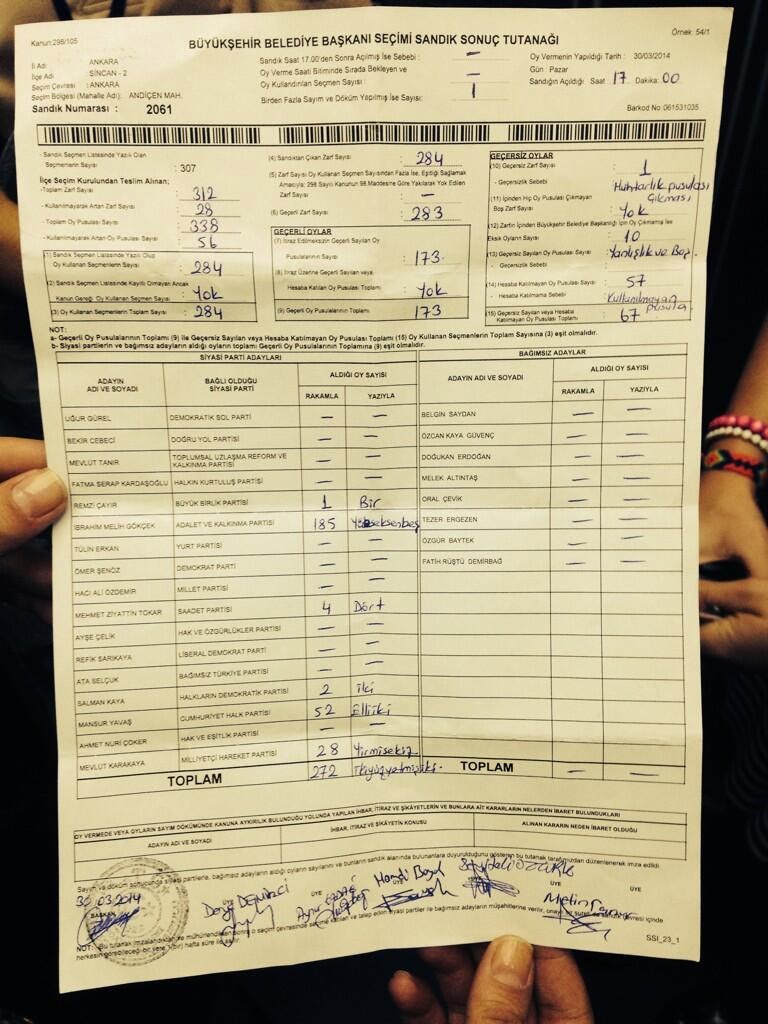 Looking at entries (3), (9) and (15), we immediately notice that the Golden Equation does not hold true. 173 plus 67 DOES NOT EQUAL 284. The numbers do not add up. So there is something strange going on here. We then look at the votes received by each party and their total, and see that the total is 272. We also see that independents received no votes. According to the note labeled "b" above stated that the sum of these two, namely 272, must equal entry no. (9), that is, the total number of Valid Votes, which is recorded as 173. This equation does not hold true, and this is the source of the allegation that at this ballot box, AKP's votes were deliberately increased from 85 to 185 and this is the smoking gun of the election fraud allegations. Yet, the more likely scenario is that (9) had to be 272 or 273, but the committee somehow reduced it to 100. I also would like to state that the total number of votes received by the political parties (272) is less than the total number of votes cast at this ballot box (9), that is 284, and it is in line with the general trend. Many ballot boxes have around 270-280 votes for all political parties. For all the problematic ballot boxes where attendance rate exceeds 100%, the total number of votes for all parties are ALWAYS less than the number of registered voters. Furthermore, in all these cases, the number of invalid votes is excessively high.

For the ballot box no. 2061, the entry that confused the ballot box committee and wreaked havoc in their calculations is (14). It is 57. But this is not the only information given in this report. Just below number 57, the report states "unused ballots". If you look at the unnumbered entry, numbered by me as (19), it is 56, 1 less than 57. So, in this report, the number of unused ballots are reported TWICE, firstly on row (19) as 56, and then on row (14) as 57. Once they mistakenly place the number of unused ballots at entry (14), there is no way the ballot box committee can balance their books.

In this case, there is no need to look whether AKP fares well at these ballot boxes have or not, or wonder why on earth is the number of invalid votes excessively high. The unused ballots are included under invalid votes and we know this is not a speculation, because the report explicitly states that entry no. (14) has "unused ballots."

Bravo, sir. Thank you very much